It’s fair to say not many in the Minnesota State system have seen and done as much as RCTC Interim President Mary Davenport, who will retire June 30, 2018.

In announcing her retirement to the faculty and staff of RCTC in August of 2017, President Davenport had much to say. 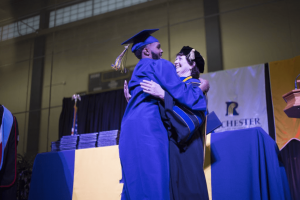 “I’ve been very fortunate in my career to work in a field that I love – education. Moreover, I’ve been fortunate to work for thirty of those years in a state that I love – Minnesota. And to top it all off, serving this College as Interim President is more than I ever imagined. I’ve said it before, this is a great College, with phenomenal people, in a wonderfully dynamic city.”

During her 30-year tenure with both the former Minnesota Technical College System and merged Minnesota State system, Dr. Davenport has worn many hats, logged many miles, but has always kept her focus on putting the students first. As she prepares for her retirement and transition away from campus life, it is worth looking back at the remarkable career and journey President Davenport has taken in her three decades of service to Minnesota’s state colleges and universities.

Interim President Davenport started her career in Minnesota in 1988 as Vice President and Curriculum Specialist at Hibbing Community College (HCC) on northern Minnesota’s Iron Range. At HCC, she led the initiative to convert clock-hours to credit hours, as well as managing and developing programs, leading technical education preparation, and facilitating the merger with Eveleth Technical College. 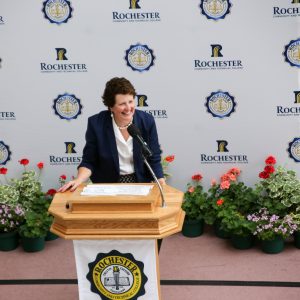 Through her success in Hibbing, Dr. Davenport joined the Minnesota Technical College System in 1993 as System Tech Prep Program Director where she implemented and oversaw growth of the statewide technical education preparation initiative. In 1995, Davenport assumed the role of System Director for Educational Grants and Carl Perkins Vocational Technical Education, where she led the first joint State Plan for Career and Technical Education (CTE) with the Minnesota Department of Education, and worked with the U.S. Department of Education on Perkins Grant reauthorization and accountability issues, as well as advancing statewide partnerships.

In 2005, Davenport took on new challenges as the System’s Executive Director for State and Federal Government Relations where she led the development and implementation of the System’s political engagement strategy with federal, state, and local elected officials, regulatory agencies, and key policymakers.

Dr. Davenport returned to campus life in 2011 as Interim Dean of Health and Service Programs at Saint Paul College where she was responsible for the management and leadership of healthcare and service occupation program areas. Following her one-year interim appointment, Dr. Davenport was named Vice President of Academic and Student Affairs at Riverland Community College in 2012.With campuses in Austin, Albert Lea, and Owatonna, Davenport was charged with the management and leadership of academic program offerings and student services at the three Riverland campuses.

Though four years into a position she truly enjoyed, Davenport was about to come face to face a new set of opportunities and challenges. 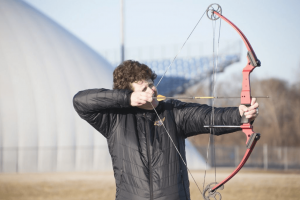 Following the six-month appointment of Joyce Helens as RCTC’s Interim President, the Minnesota State Board of Trustees appointed Dr. Mary Davenport as RCTC Interim President beginning July 1, 2016. In the 18 months prior to her arrival, the College had experienced a number of leadership transitions and other challenges. Though many daunting tasks lay ahead including the College’s reaffirmation of accreditation, Davenport took each in stride and led the College with grace and wisdom that one can only acquire through many years of dedication and service.

Reflecting on her time at RCTC, Davenport said, “Being a member of the RCTC college community has been the capstone to my career. Feeling the commitment of RCTC faculty and staff to students will forever stay with me.”

In comments to the Minnesota State Board of Trustees’ Human Resources Committee, Chancellor Devinder Malhotra said, “President Davenport inherited a challenging situation and has done a brilliant job in getting the college back on track and repositioning it to secure its future. She has expanded partnership opportunities with Rochester-area businesses and organizations, significantly improved internal college communication, and led the college through the process of receiving reaffirmation of accreditation.”

Davenport offers simple advice for the staff and faculty of RCTC: “Never forget that the reason you are here at RCTC, is to serve our students and to improve students’ lives. Live the RCTC mission every day. Demonstrate our core values every day. Don’t forget to live the ‘Golden Rule.’”

Following her last day at RCTC, Dr. Davenport is looking forward to living with her husband, Dr. Richard Davenport (President of Minnesota State University, Mankato), and “having only one residence!” She plans on spending time with her family including her 98-year-old father, her daughters and their families, as well as doing some traveling, reading, and possibly some writing.

When asked if there was one specific memory from her career that stands out, she responded humbly.

“Serving as President of RCTC will always be the highlight of my career.”

For many at the College, Davenport’s time at RCTC will be a highlight of their careers as well.

Read about the women in BUM, or learn about non-traditional students with a passion for cleaning teeth. You can also read the entire digital issue.