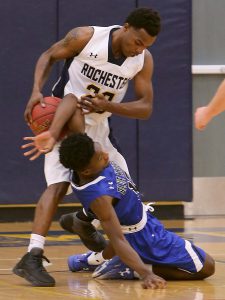 RCTC’s Malik Jones tangles up with Termaine Daniels of Dakota County Tech for a rebound during the home opener on Nov. 16. (Photo courtesy of Scott Jacobson, Rochester Post Bulletin)

This year, the RCTC’s men’s basketball team started the season on Nov. 16 with a home game against Dakota County Technical College. Coach Brian LaPlante is enthusiastic about his team.

“My goal is always to win the Southern Division and win the region tournament and advance to the national tournament,” he said.

The main difficulty LaPlante thinks he will be encountering is inexperience and youth of the team.

“We are very young and inexperienced and we will need to grow and mature quickly,” he said.

He knows his team can play well and the season will be full of great games.

LaPlante’s philosophy is to work harder than other teams, to teach his athletes to become great teammates, and be accountable for their actions. One of the ways he is going to achieve this is through his game plan. To help with the smaller size and youth of his team, LaPlante is planning on using the press to transition his players into a hardworking and an accountable team.

The basketball team will have 17 players this year, with six sophomores and 11 freshmen. Gorg Alhag and Malik Jones are two great players to watch, as they will be key players in leading the team.