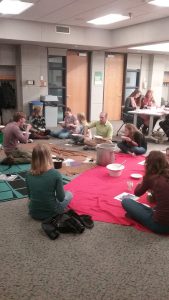 The French Club divided itself by income to illustrate the inequity of wealth and food throughout the world. (Echo Photo by Lydia Smith)

Holidays are approaching, and many people look forward to them with the overabundance of good food as well as the festivities.

That is not the case in many parts of the world, which live in poverty. Many of these people may be wondering where their next meal is coming from.

“We have enough food to feed the world,” said Connie Larson, a French teacher and faculty adviser of the French club, “It’s a balance of power.”

This November, the French Club decided to get involved with this problem by hosting an Oxfam banquet. (Oxfam is an organization that works to end hunger around the world.)

Members of the club attended along with people who had been invited to participate. Everyone was assigned a class or income level, which determined where and how they would eat. The elite for the evening were served by waiters, while middle-income people went to a buffet-style table and served themselves. The poorest people, who were the largest group, sat on the floor and served each other from a pot of water and bowls of plain, cooked rice.

The club used this setup to illustrate just how unequal the distribution of wealth and food is. It also served to educate Americans about hunger problems around the world. Roughly, 50 percent of the people present at the event represented those who struggle to survive each day with no readily available healthcare and school a luxury that cannot be afforded. Only 20 percent of the people attending represented the elite, who are able to afford health care and nutritious food.

Many of the people at the event responded with their thoughts about the evening and how it had impacted them. Food is often wasted and taken for granted, even though many people live in poverty and cannot get enough food. Many may also not realize how privileged they are to live the way they do. They may not appreciate that they can live in reasonable comfort and have the opportunity to attend school.

“But it really puts it into perspective,” said Sophia Fulton, president of the French Club, “This is a really amazing opportunity we have.”

The French Club wished to accomplish a few things with their demonstration. They hope that this will encourage people to do something about the problem of hunger and poverty. They would like people to try to make a difference by considering to donate to organizations like Channel One, Oxfam or local food shelves. The French club’s goal with this event is to bring students together, Larson said. They also hope that other clubs will want to get involved with this event next year.