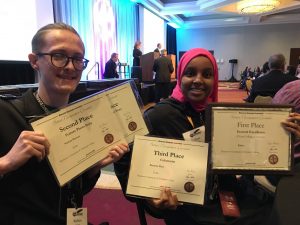 Nathan Hoover and Ilhan Raage represented The Echo on Jan. 30 at the 2020 Minnesota Newspaper Association annual awards ceremony, where The Echo placed first in General Excellence ahead of four-year university newspapers.

In the program notes, judges wrote, “Excellent newspaper! Full of ads, good editorial page, in depth, quality news coverage. Layout is clean and easy to read, nice use of photos and color”

The Echo’s first-place finish in General Excellence is a noteworthy achievement because it competes against student newspapers from four-year universities throughout Minnesota.

“I’m extremely honored that we received this award,” said Ilhan Raage, who served as The Echo’s editor in chief during the 2018-2019 school year before transferring the University of Minnesota. “Working with everybody on the staff at The Echo was a rewarding experience beyond measure.”

Hawa Sheikh-Adam, now a student at Marymount University in Virginia, placed second for arts and entertainment reporting for her story about the “Within Without” exhibition by artist Jennifer Onofrio Fornes. Judges said “‘Within Without’ would be fascinating to see in person. The story is very deserving of this award.”

Breanna Shen, now a student at the University of Texas at Dallas, placed third in column writing. About Shen’s column headlined “Ivy League doesn’t guarantee success,” judges wrote that “the writer made her case that the prestige of a college doesn’t determine the success of student attending it. She supplied several examples of areas RCTC students excel to support her argument advocating that community college is valuable.”

This is the fourth consecutive year that The Echo placed in general excellence in the MNA’s Better Newspaper Contest. It placed first in 2019, second in 2018 and third in 2017.

“The General Excellence award confirmed what I already knew,” said Dwight Boyum, who served as faculty adviser during the 2018-2019 school year. “We had a talented staff committed to serving their campus and community.”

The awards were presented Jan. 30 at the Minnesota Newspaper Association’s annual ceremony at Minneapolis Marriott Northwest in Brooklyn Park.