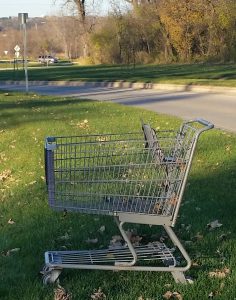 Folks will drive on UCR Drive, pass this shopping cart, chuckle a little, then drive on, and forget ÷

Not me. God only knows who put that cart there. Often too many people will overlook the purpose of something so random, so simple, so offbeat.

As I drove home from school, thinking to myself how hilarious the next four years will be, I drove past the cart, which had been sitting on the UCR roadside for over a week.

“What if I wrote a story for the Echo about this shopping cart?” I thought.

With the RCTC Foundation scholarship portal opening soon, I knew that a story about applying for scholarships was in need of being written. Again.

Of course, every year it’s the same. “Apply for scholarships! Too much money goes unclaimed every year! You have a chance if you apply! Not enough people apply! Blah blah blah.”

We get it. Yes, I’m talking to you, faculty of RCTC. We need to apply for them. Enough already.

So this shopping cart. Kind of weird, right? Just sitting there. Brown, dead leaves as patrons in its basket. Unclaimed. Completely out in the open. Exposed for what it is Û humble.

What if this shopping cart was worth $3,000? It probably does have some monetary value, but not to that extent. Let’s pretend for a minute that it was worth $3K. It’d have been gone yesterday. In fact, the minute it was abandoned, it would not have been long before someone came along and snatched it away.

Let’s say there were two people who found it at the same time. What then? Would all hell break loose? Would the police be involved? Who knows, really. Now let’s resume to where we are today. A boring shopping cart sitting on the roadside of UCR Drive. Abandoned. Exposed. Unclaimed.

That shopping cart is the thousands of dollars that are available to students via the Foundation scholarships. I’m not some middle-aged faculty member screaming at you from the depths of your unconsciousness that you, a financially lost student of RCTC, need to apply for these scholarships, or else the demonic student loans will kill you and eat your family.

I will state this Û it’s really just free money. Think about it. How hard would it be for you to go get that shopping cart, call Cub Foods (which is most likely where it came from), explain to them the situation, and ask them if they’d give you some kind of reward to return it? They might, or they might not. For this story, let’s say they do. Yet folks will just drive by and not see the potential in making the claim. Too many students see the advertisement for the Foundation scholarships, but do nothing. Truthfully, I didn’t believe I’d get one until I did apply. Between the last two academic years, I’ve received three.

There is real purpose in the red wheelbarrow, my fellow students. I promise you that.