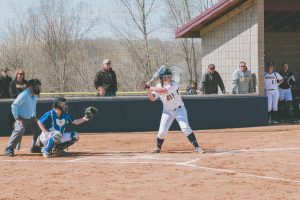 Voth, a center fielder from Goodhue, was defensive standout with only one error on the season en route to a .960 fielding percentage. Voth hit .377 on the season, with 43 hits, including eight doubles.† She scored 38 runs and drove in 10 runs as the leadoff hitter.†Voth also led the team with 20 stolen bases.