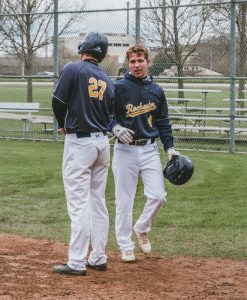 Zach Wolter, No. 4, talks to Matt Rhodes, No. 27, during a May 9 doubleheader against Riverland Community College. (Echo photo by Nathan Hoover)

Four members of the RCTC Yellowjackets baseball team were named to the All Southern Division team of the Minnesota Collegiate Athletic Conference.
Jeremiah Van De Steeg, a sophomore pitcher from Hutchinson, was named to the first team.†Van De Steeg†led the Southern Division in with seven wins.Van De Steeg had seven complete games, two shutouts and tossed over 52 innings for RCTC. His divisional ERA was 2.30.

Joining Van De Steeg on the first team were Ethan Hurn and Matt Rhodes. Hurn is a sophomore from Granada who pitched and played third base for the Yellowjackets,†appearing in 33 games and†scoring 22 runs. He stole six bases and had one home run while plating 15 runs batted in.† Hurn also had two wins on the mound in six starts for RCTC.

Rhodes, a sophomore from Carlisle, Iowa, led the Yellowjackets team in plate appearances with 97. He batted .309 during that time, collecting a team-high 30 hits, including three home runs. His 27 RBI and 17 doubles also led RCTC in those categories. 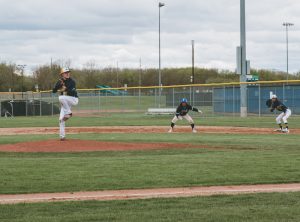 Jeremiah Van De Steeg, who was selected to the All Southern Division team, delivers a pitch against Riverland. (Echo photo by Nathan Hoover)

Joining Van De Steeg, Hurn, and Rhodes was Brad Barkema, a freshman from Conrad, Iowa. Barkema was named honorable-mention Southern Division. Barkema hit .397 with 20 RBI, 3 doubles and one home run. Barkema, a catcher, also had 149 putouts with only 1 error for a .994 fielding percentage. He also was named MCAC Southern Division Player of the Week for the week ending April 28.

The Yellowjackets ended its season May 17 with a 10-1 loss to St. Cloud Technical and Community College in the Region XIII championship game.