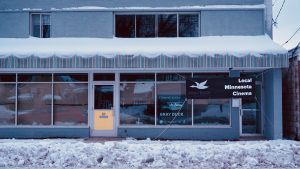 Everyone is always down to watch a good film.

†Whether that be an adaptation of their favorite book, graphic novel or maybe something that can just cheer them up. Yet there is no theater that could screen ìsmall indie films, documentaries, retrospective series and more for film buffs.î

One thing that people need to realize is that itís not always either watching a movie at home or going to the movies and spending $6 or more on a medium popcorn. There is now a third option: the Gray Duck Theater.†

With the hope of establishing a place for microcinema in Rochester, Andy Smith and his projectionist, Jacob Speckhard, are working hard to make their wish come true.†

With the Post Bulletin explaining that ìSmithís dream of opening a cinema started in the sixth grade, when he watched hours and hours of behind-the-scenes footage in the extended versions of the ëLord of the Ringsí movies,î it was showing how he genuinely enjoyed films like other movies buffs and planned to set his idea in motion to create this microcinema.†

Smith also came to the realization that while looking for a location that there wasnít a community that surrounded the film scene like there was when he lived in Los Angeles.†

ìRochester seems to be lacking a community around film,î Smith told the Post Bulletin. ìWeíre thinking that the market is ready for it. Weíre all about cinema, conversation and community.î†

Smith brought up many points on how that there were a few independent films that didnít get many showings in larger theaters but would have a better chance in the Gray Duck Theater.†

They will be playing classics, and Smith is hoping that his theaterís first series of films will be Audrey Hepburn movies.

The theater is scheduled to open in February before the Oscar nominations are announced. In the meantime, he has focused on going out and gathering information and opinions on what people are†