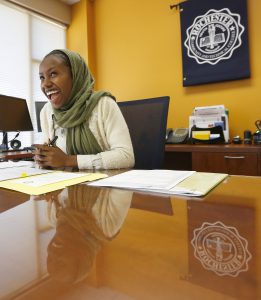 Q: What was your favorite part of the role swap?

Student President Sofia Alston: My favorite part of being college president was talking about the legislative budget. As students we always advocate on behalf of lower tuition … but as college president, my concerns were with decreasing tuition because then the college would have to make budget cuts. That would affect faculty, that would affect campus services, and a lot of things when it comes to having a thriving campus. I got to say “This is not what we want” compared to what I would usually say as student president, “This is what we want. This is what students need.”

Interim President Mary Davenport: My favorite part was how nice the students were and how generous they were to me. It could be intimidating to have the president in the class, but it wasn’t. It was fun and they were just really welcoming and helpful. In dance, I said “I’ve got to watch. I’m going to stand behind you, so I can see what you’re doing.” They didn’t laugh at me. They laughed with me. They were just so reassuring and helpful. Being immersed in the classroom just reinforced how great our students are.

Q: Student President Sofia Alston, did you feel you got the short end of the stick attending meetings all day, or were you glad to skip class?

Alston: As student president, I still do attend meetings, and I run meetings. So it wasn’t a whole lot different from that besides that there were more meetings that I had to do. So, I guess in a sense she probably had more fun being a student president than I did as college president. It’s a lot more demanding and time-consuming. I was glad that it was only for one day because I got to step into it, see what it was like, and then come back out and be myself again.

Q: Interim President Mary Davenport, did you enjoy being a student again, or was it challenging to go back?

Davenport: It was both! But I loved being a student. I could be a student full time today, and I would be happy because I like learning and doing new things. I’ve always wondered, if I were to go back and take the same courses I took when I was 18-years-old at 59, that I would really learn a lot more. I’d have all these insights I didn’t have at 18. I’d live to do that because it would be the same but different. Now I’ve had children, I’ve had houses, I’ve had a career, and to go back and learn that same content from a different context ÷wouldn’t that be cool? I’d probably be a better student.

Q: What was one aspect of the swap that no one has asked you about that you thought was valuable to you?

Alston: When I did my first Cabinet meeting, I went into it with this perspective of “What can I take back to my own Student Senate? How is it set up? How is it structured that I can implement that in my own student senate or my own executive board or at least lay out for the next student president that comes along?” I think a lot of people focused on the “Oh yeah, you got to be the big college president. You got to do all these great things,” but it was also really a learning experience.

Davenport: Sofia and I actually had a chance, the way our days were laid out, to come together at the end. The administration always meets with the Student Senate executive group, and it was such great timing because, at that meeting, I was Sofia, and Sofia was in my role. Nobody asked how we recapped the day, and I would say we did at that meeting. It was fun because we did take each other’s point-of-view during the meeting. We were talking about the budget and the state legislature and the budget they’re presenting. I could take it from the student perspective and be looking at the tuition decrease and say “That’s good for me, but I want to make sure classes and activities are all available.” And Sofia took it from the position of “That 1 percent is really going to be difficult for us because that means potential cuts.” I think that really brought it all together at the end of the day in a really nice way that we really had stepped in each other’s shoes.