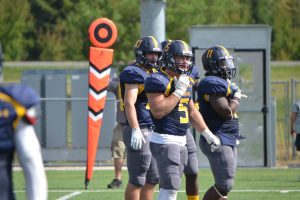 Former RCTC linebacker Brandon Perce (right), helped lead the Yellowjackets to a 6-3 season in 2018. This fall, he will play for the Falcons at Bowling Green State University in Ohio. (Courtesy of RCTC Athletics)

Brandon Perce, a former RCTC student and linebacker for the Yellowjackets, is now playing football at Bowling Green State University in Ohio.

Perce, originally from West Allis, Wisconsin, signed a NCAA Division I scholarship to attend Bowling Green, making the transfer at the end of the fall semester. Under the scholarship, he will have two seasons of eligibility to continue playing football with the Bowling Green Falcons.

While a sophomore at RCTC, Perce stacked up an impressive list of honors. He was named 2nd Team All American by the NJCAA in December last year, racking up 56 solo tackles and 72 assists at the time. This was an average of 14.2 tackles per game in 2017. Nationwide, he ranked number two for tackles.

ìHe has a huge motor,î RCTC head coach Derrick Hintz said of Perce. ìThatís what you look for in a linebacker.î

Perce was also a key component in the Yellowjacketsí successful season last fall, helping create standout defensive performances over the fall that led to a second-place finish in the MCAC Eastern Division contest.

Although Perce was unable to be reached for comment, Hintz, who coached Perce last year, said Perce had plenty of options to choose from when it came to playing football.

ìA lot of the numbers spoke for themselves,î Hintz said. ìHe was on a lot of schoolsí radars when he graduated high school. He had a lot of offers. It was just finding the right school that was the right fit for him.î