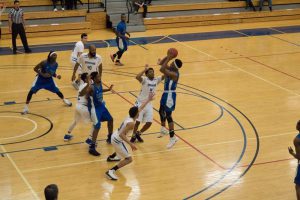 North Lake of Irving, Texas, was the No. 5 seed, beating fourth-seeded Davidson County College 83-77, No. 1 seed Anoka-Ramsey Community College 56-54 and finally, Elgin Community College to claim the championship during the tournament held March 16-18 at the Regional Sports Center.

Next year, the men’s tournament moves back to New York, and then it will return to Rochester in 2019.