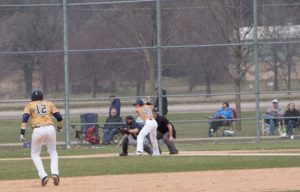 Garrett Zander takes a lead off second base while Ryan Rentz bats during the home opener against Central Iowa Community College on April 8. The Yellowjackets swept a doubleheader from Central Iowa, winning 6-0 and 6-1. (Echo Photo by Isaac Sindt)

This is Hucke’s 14th season as head coach. He has a record of 282-239-1 with the Yellowjackets baseball team. Last year the RCTC baseball team went to the MCAC Region 13 tournament with an overall record of 32-12.

This year RCTC is looking to have a strong season due to their strength and experience in pitching and the return of many starting players. These included NJCAA and All-American award winner Dustin Nelson (catcher/outfielder), Damon Nuss (shortstop), Austin Baab (infielder/pitcher), and Anthony Rosaria (first baseman).

Coach Hucke is confident in the team, and he expects them to compete for the state title with St. Cloud Tech, Riverland, Itasca, Fergus Falls and Mesabi Range.

“With a majority of starters both in the field and the mound back, we feel that we will be able to contend and battle for division, state, and regional titles,” Steve Hucke said. “(We) have a great group of players who work hard and play hard.”