The Yellowjackets soccer program has a long and successful history.

But it’s experienced significant changes since former head coach Deb Hare stepped down after nearly 20 years of leading the team. Coach Hare has been named the NJCAA Region XIII Coach-of-the-Year 13 times, entered the 2017 fall season as the winningest active women’s soccer coach at the NJCAA Division III level, and is found in the top six most successful two-year coaches across all three NJCAA Divisions. Hare was tasked with starting the program in 1998 and has posted a 210-103-14 record over that span.

While the past two seasons have been tough ones for the Yellowjackets, a new head coach, assistant coaches, and a large number of recruits look to put the squad back on a winning path.

Most noticeable on paper is the number of sophomores. There will be nine compared to the two on the squad last year. There is also more depth, with 18 players making up the squad versus the 12 two seasons ago and 14 in 2017.

Plus, star midfielder Kallie Keller is returning, along with defender Shelby Bailey, who scored a game-winning goal in a regional semi-final last season. The Yellowjackets were then swatted in the regional final, but it was a heroic late-season showing for a team low on players and hit with injuries.

New head coach Bryan Weiss shared with us things to keep in mind when watching this new-look team, which begins play Saturday at home with an alumni game, and plays Dakota County Technical College at home on August 23.

The 2018 Yellowjackets are being led by nine sophomores

“The RCTC Yellowjacket soccer team is blessed to have eight returning players, women that have experienced college games, practices, road trips, and academic responsibilities,” says Weiss. “The sophomore class includes leaders like Sarah Baack, Bailey, Makayla Day, and Keller. They have already been invaluable in leading the team through offseason and early season efforts.”

RCTC has added nine freshmen to the roster

“The coaching staff is excited about the freshman class,” Weiss says. “They have obviously been working hard throughout the summer to be prepared to compete for starting positions. We are expecting great things from them.”

The playing style will be aggressive

“Our goal is to play intelligent, aggressive, team soccer,” Weiss explains. “We want our athletes communicating and supporting each other in all phases of the game. The Yellowjackets will also be applying constant pressure on our opponents in an effort to take away time and space, which should in turn decrease their accuracy and possession. As our team learns this system we will definitely see improvement on the field.”

Head coach Bryan Weiss has over 20 years of coaching experience, including most recently serving as a head coach of girls’ competitive club teams for the Rochester Youth Soccer Association. He also has collegiate experience with Judson College, Crossroads College, and Briar Cliff University. 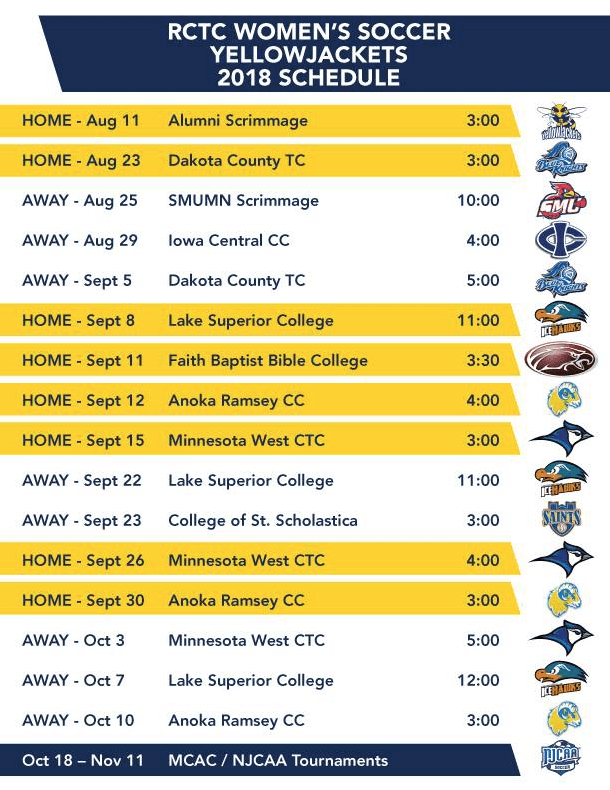