Stare at your phone too intently and you may never see the low, smooth carapace of the painted turtles darting through ponds, the bellies that could be mistaken for a wide array of orange and red lilies, or a summer sky set ablaze at sunset. 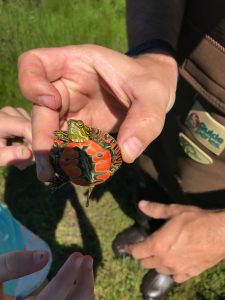 A population of painted turtles are swimming and scooting around Rochester Community and Technical College’s (RCTC) campus. These turtles are relics in a way, existing here long before the College was founded in 1915 by Dr. Charles Mayo.

They thrive in the area because the campus is plotted in and around the Mayo Run watershed.

“They’re here basically because this whole campus is a wetland,” RCTC instructor Cory Rubin, Ph.D., explains. His daughter is holding a tiny, 23-gram turtle next to him as he records a variety of metrics into his iPad.

It’s a perfect place for the turtles. Not only that, but some ponds exist on campus that don’t have any fish, meaning less competition for food.

Tadpoles, bugs, and more all become a delicacy reserved for painted turtles.

Rubin has been able to find 39 unique painted turtles since he began consistently researching them last year.

“The population was probably here before it (RCTC campus) was built, and this is the same population,” Rubin says.

Rubin has studied turtles for a long time, first observing the threatened Blanding’s turtle while earning his doctorate in Natural Resources and Environmental Sciences at the University of Illinois in the 90s. Back then he also studied grouse and grassland song birds, which, along with the Blanding, are much harder to study.

“I like turtles,” he laughs when pressed on his turtle studies. “The other thing is, anyone can do it. Birds are hard to catch, hard to deal with, hard to handle. You need special permits from the state and federal government to do that.”

Turtles are relatively easy to scoop up, but prefer not to be in a net. The tiny one Rubin catches after stepping into the pond to check a trap doesn’t enjoy being out of the water. Its stubby green legs are quicker than they let on, and it nearly sprints up and over the side of the net before Rubin is able to grab hold of it. 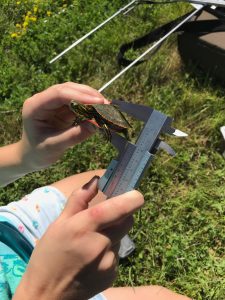 Its sprinting is a lot more helter-skelter than the graceful laps it had been performing just seconds earlier in the pond. The tiny critter and the rest of the painted turtles in the pond are not listed as threatened. In fact, when Rubin called the Minnesota Department of Natural Resources to check in on what he needed to do in order to study them, the worker pretty much replied with, “Sure. Whatever.”

Which leads to a hot summer day in July with his daughter. He’s decked out in waders, checking traps and restocking them with chicken livers (a delicacy for painted turtles) after recording this turtle’s weight, size, and markings. His daughter scans the pond with an antenna nearly as long as she is tall. The beeps surge when she’s pointed it toward one of the female adults fitted with a tracking receiver.

It isn’t in the trap. Instead, like the three smaller turtles spotted before Rubin slid into the pond, it’s darting in and around the lily pads, chasing down food and avoiding what now must be a somewhat familiar visitor in the water.

Catching turtles in the traps can be a crapshoot. One type of trap is set up to give the turtles a place to soak up the sun. Once startled they will either dive into the pond or straight into the trap. Another trap will actually close around the turtle once it goes for some savory liver.

While Rubin enjoys this time studying turtles with his daughter, it isn’t just for fun. There’s a classroom use for it as well.

In the fall, Rubin brings the data into the ecology (BIOL 2000) classroom. Students in the class are environmental science majors, so it makes sense for Rubin to bring them outside to work with the turtles. All the data collected is analyzed in class to figure out things like age distribution or what might affect the population.

After two summers of studying turtles, Rubin hopes to one day figure out just where two female turtles are laying eggs on campus. Even with so many turtles around, it remains a mystery. One of those longtime turtles, a larger female, has also gone missing.

Rubin found its transmitter on the road, but the turtle was nowhere to be found. 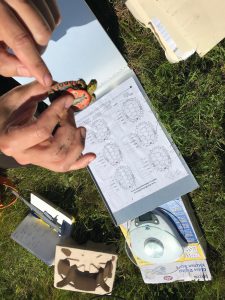 In the meantime, RCTC has a thriving painted turtle population. The only real danger posed to the turtles are cars, or the red-eared slider.

The red eared slider is a common pet store turtle and not native to Minnesota. It’s an invasive species. Rubin explains that he has noticed them in Quarry Hill, which is bad news for any local turtles since they are larger and can outcompete a painted turtle.

While Rubin would like students to look away from their phones so they might spot a painted turtle on their walk around campus, there is something fun about a somewhat secret turtle population hanging around campus while students sit in lecture halls.

If you happen to find a turtle struck by a vehicle, please let Rubin know so he can investigate whether it is one of the turtles he studies.