Sometimes, education requires a student to embrace humility and hard-work. First-year students Ikar Adde and Amina Araye learned that first-hand when they were placed in READ 800-Excellent Reading, a pilot program designed to up students’ reading skills to the point where college texts are beneficial to them.

It’s an exciting new course here at RCTC, but here’s the thing: Adde and Araye are both poets, writers capable of bending the English language to their will and sending chills down the spines of readers and listeners alike. What were they doing in a reading class?

According to reading instructor Michelle Cochran, their bilingual brains may have landed them in READ 800.

Araye was born in Uganda, but came to the U.S. at a very young age. She started school at Riverside Elementary here in Rochester. She is fluent in Somali, but the last of her siblings to be so, as they all arrived in the U.S. at a young age. Adde came over when he was 10. He spoke Somali when he arrived and it’s still the main language in his home.

The bond a brain has with its first language is forever. For some students, that bond can lead to less reading fluency in English. So, a new pathway must be created, through training, much like a muscle is built through repetition. This is true even for a student like Araye, who has spoken English more than Somali at this point.

READ 800 seeks to break down barriers to fluid English for English as a Second Language (ESL) students as well as those with reading disabilities, low-literacy backgrounds, and other roadblocks that may have gone unaddressed during high school.

“It’s the volume of reading that we do and it’s also the fact that there is somebody right in front of her face,” said Cochran. 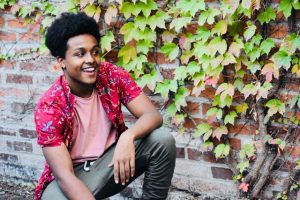 The program also combines what was previously two semesters worth of reading class work, allowing students to get into more specialized classes much quicker.

While many gifted poets like Adde and Araye may have felt stung at being placed in a developmental reading class, neither Araye nor Adde have succumbed to the temptation of slacking off or believing the class is beneath them.

“At first it just felt like this class was, like, why am I in here? My reading isn’t that bad. I could just retake the test and probably pass it,” said Adde. “To be honest, right now, I just feel like it’s really helping…. I can tell. Right now, when I read stuff I try to read it perfectly. Before it was just like, let me just read it.”

“On top of that we’re getting more familiar with words that we’ve, yes, heard, but words that we can actually use on a daily,” said Araye.

That daily vocabulary alone will help the two students, who have a world of options ahead of them. Araye is considering becoming a respiratory therapist, a journalist, or a teacher, while Adde has his eye on the nursing program, though his mind is alive with possibilities.

Adde sees staleness all around him. From graduation gowns to the rigid public education system he grew up in, he sees opportunities for innovation. Trouble is, innovation requires money, organization, and influence. So, he wants to get out to Los Angeles, where it’s easier to get near influencers.

“Things are changing daily. I can feel it, but in a way, I just feel like there’s nothing I can do about it and it bothers me,” said Adde. “That’s why I started doing poetry; it just made me move it [the world, society] mentally without having to connect it to the rest of the world, you know? By myself, in a way.”

“I have to go fully all the way and bring something back to the family. It’s not even money wise. It’s showing that they’ve raised someone. Someone that is what they wanted me to be, in a way,” said Adde.

Despite an increasingly frightening national climate of division along racial and religious lines, at RCTC, they’ve both found a place ready to help them climb to the heights they want.

“Us Somali people, I mean, things shouldn’t be hard just because a lot of people are bilingual and there’s like a lot of racial comments out there,” said Araye.

“In our households, it’s different. There’s so much love and like, people, we don’t really talk down on each other. Everything we do just seems like it’s out of love. We don’t say we hate you,” said Adde.