In the early 1970s, the Plaza East and West buildings were the hottest new real estate on the Rochester State Junior College campus. With offices and classrooms – including what is now Memorial Hall 223, a 220-seat lecture hall which holds the distinction of being the largest classroom on campus – the two buildings were a welcomed addition to the growing College.

Unfortunately, as the needs of students and the College evolved over time, the concrete bunker-esque buildings quickly became outdated, inefficient, and obsolete by today’s standards. MH223 now only seats 190 students thanks to deterioration. Lack of adequate space, failing mechanical systems, inaccessibility, and life-safety issues plagued the buildings and those who learned and worked in them.

Thus brings RCTC to the present – or at least 10 years ago.

Seeing the need for more flexible, learner-centered space, RCTC began the capital improvement project funding process to coincide with the 2008 Minnesota Legislative Session. The original predesign documents for the Plaza and Memorial (Plaza West was renamed in 1988) Halls project were completed in November 2008. The project was submitted for design funds beginning with the 2010 capital bond request and was listed as project number 17 on the final Minnesota State capital bond request in 2012.

The Plaza and Memorial Hall project was not funded that year, but it was scored and vetted again in 2013, 2015, and in 2017. The project did receive $1 million in 2014 to create initial design documents, but had received no further funding. Despite ongoing support from local legislators, the project kept missing the cut.

As part of the 2018 legislative session, the Minnesota House and Senate sent Governor Dayton a nearly $1.5 billion capital investment and bonding package which allocated the necessary funds for the Plaza/Memorial Hall project.

New offices, flex-space, and a large, versatile classroom will occupy the two-story addition which wraps around Endicott Hall, Coffman Center, and Singley Hall on the west side of Main Campus. The existing maintenance garage and old child care center will be torn down. A new building entrance and drop-off lane will also

In an effort to maximize space utilization amongst existing square footage, spaces in Endicott, Singley, College Center, and Science and Technology buildings will see a number of upgrades and renovations including moving walls, upgrading technology, updating furniture, and making the spaces more learner-friendly.

After 10 years treading water, faculty, staff, and students are more than ready for the project to begin. From leaky ceilings, rodent infestations, drafty walls, inefficient and inoperable ventilation systems, falling ceiling tiles, and so much more, horror stories abound when you mention Plaza and Memorial Halls. RCTC student Mady Keilen who had Human Anatomy and Physiology in Memorial Hall 223 noted, “the room has been nicknamed the dungeon. Which is very fitting for it.”

English Instructor Pam Whitfield says she must leave her office heat on “24/7 for six months of the year,” saying if she were to shut it off, it doesn’t come back on without Facilities and Maintenance intervention.

“I have no idea how they do it, but it dies every time and then my office is ridiculously cold for the next few days until maintenance can get to it.” 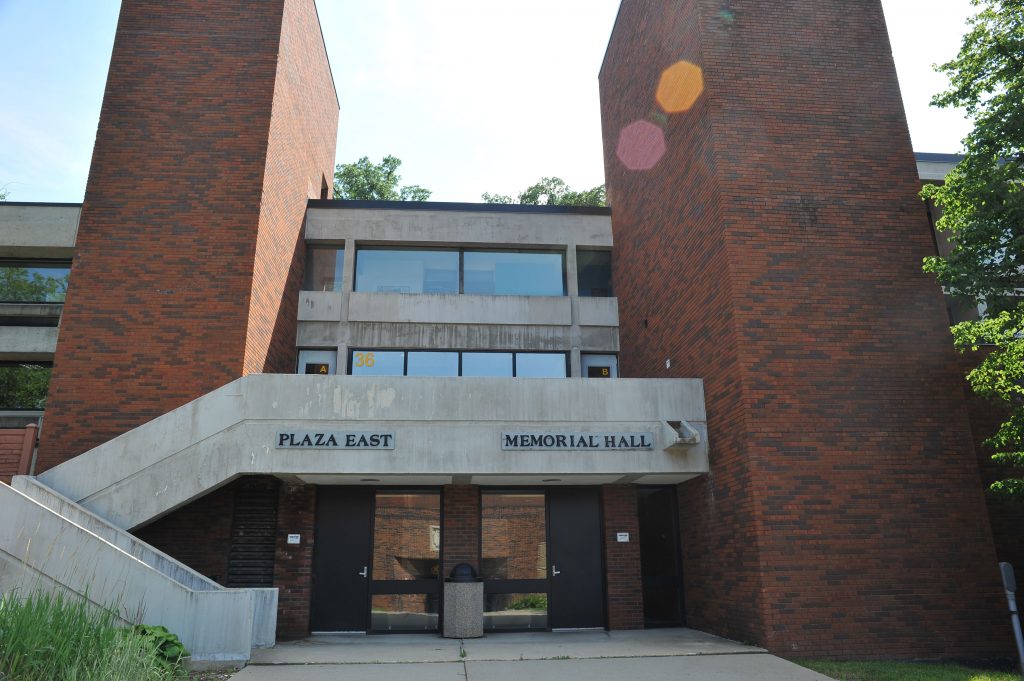 Communication Instructor Annie Clement has resorted to “MacGuyver-ing” her own tool to fix her heating and air-conditioning unit.

“You bend a paper clip so there are two sharp points. Next, you make sure your unit is turned off. Finally, you find a white box mixed in with some wires and you jam the sharp points into either side, and, tada! You have heat or cold.”

Mike Mutschelknaus, whose office is on the fourth floor of Plaza Hall, laments, “In the spring time the rain leaks from the roof, trickles down the walls, stains the ceilings, and, during heavy rains, actually pours as torrents of water into giant trash can tubs.”

Due to poor air-handling, Philosophy Instructor Tim O’Neill said, “In the summer, the fourth floor becomes a jungle.”

The inconsistent and ineffective HVAC systems have created noted challenges for faculty, staff, and students who spend time in Plaza and Memorial Halls. O’Neill adds, “For many years, we have rented and run industrial dehumidifiers in Memorial and Plaza Halls. In addition to the rental costs, these machines must draw heavily on the electricity. The dehumidifiers are obnoxious.”

Now that funding has been secured, the entire project is expected to be completed within two years. The first step will be to complete the remaining construction documents, contractor bidding, and contract awarding – hopefully concluded by September 30, 2018. Construction, renovation, and remodeling is expected to start in October, concluding in mid-July, 2019. Demolition of Plaza and Memorial Halls is slated for mid-September 2019 through October, 2019. The final project, courtyard and exterior improvements, will begin in November 2019 with an anticipated completion date of July 31, 2020.  Of course, these are educated estimates and actual timelines may vary.

The College is looking forward to a formal groundbreaking later this summer, then construction to get underway this fall.