For the first time ever, Building Utilities Mechanic, or BUM, has four female students in the program at once. That shouldn’t be news, but in a day and age where gender roles are still maliciously assumed and assigned, it’s joyful to see four students unafraid to go for their dreams.

In spite of BUM being a male dominated program, the quartet hasn’t run into any issues in the classroom. 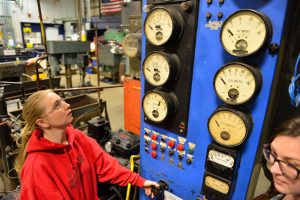 “One of my concerns coming in is I knew that it would be all men,” Leah Barbosa, who is finishing up her first semester, says. “It wasn’t so much a concern as like, how am I going to fit in and, conversation wise. I’m very outgoing, a social person, so those connections are important to me. How they look at you, how they treat you.”

“You almost have to prove yourself to them, in a way,” Erin Meyer, in her final semester, cuts in. “That took like a week, or less,” she adds, giving an example of how fellow students were asking her right away about her plumbing loops. “At first it was a little bit intimidating. Surrounded by all these young kids.” (Meyer is a non-traditional student who has worked at Mayo Clinic for 13 years, and is currently working in the emergency department.) “But now I’m just one of them.”

“I have to admit it’s kind of nice walking in and seeing Tysha there,” Stuve says. “I’ve never felt like I had to prove myself.”

For them, there is a shared bond of putting their hands to use and ensuring things work. Meyer and Stuve both had grandparents who taught them how to fix things around their farms. Allen was first interested in construction but was swayed by a family friend to pursue BUM. 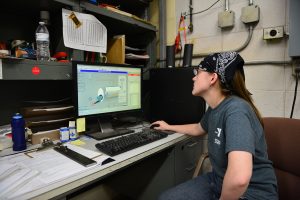 Barbosa had a previous job where she coordinated service vendors.

“As they came into the building I saw the work they were doing, took an interest in that, and thought, not only was I interested in it and it seemed like stuff I could do, but stuff I should know how to do,” Barbosa explains. “It seemed silly calling people in for some of the basic maintenance stuff of running a building.” 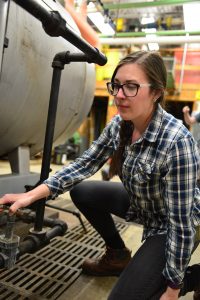 All of them agree that the work also provides good money, and the eclectic labs are a plus that anyone can learn.

“Speaking to the gender specific piece, I remind myself that these are learned skills,” says Barbosa. “Men are not born being mechanically inclined; they learn it. So, just like women can learn, it’s not an issue.”

The hands-on part of it seems to be the best part of the program overall. If you walk into one of the labs, you see steam, valves, toilets –and eventually you go out and work around town. Meyer spends hours of her week utilizing her skills at Mayo Clinic and its surrounding properties.

“I’m still surprised by the variety; every semester is different. It’s such a hybrid program,” Barbosa says. “This, I’m just still shocked that it’s all able to fit.”

The students might call the BUM acronym “painful,” but it’s one that makes sense to the local industry, each student says.

And even though gender isn’t the focus of the work, and shouldn’t be, Barbosa thinks that maybe there is some kind of connection to it.

“I think for women it’s ironic,” Barbosa begins. “Caregiving is so innate to many women. But if you think about it, taking care of a building is another form of caregiving. A building is just like a body; there’s interconnected systems, there’s preventative maintenance, parts that give out as the buildings get older. When I’ve talked with younger women I’ve kind of mentioned that, had them think about it in a different way.