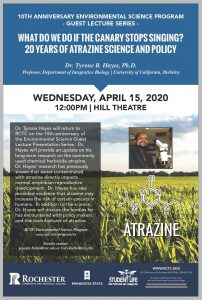 Title: What Do We Do If The Canary Stops Singing? 20 Years of Atrazine Science and Policy

Description: Dr. Tyrone Hayes will return to RCTC on the 10th anniversary of the Environmental Science Guest Lecture Presentation Series. Dr Hayes will provide an update on his long-term research on the commonly used chemical herbicide atrazine. Dr. Hayes’ research has previously shown that water contaminated with atrazine directly impacts normal amphibian reproductive development. Dr. Hayes has also provided evidence that atrazine may increase the risk of certain cancers in humans. In addition to the science, Dr. Hayes will discuss the hurdles he has encountered with policy makers and the manufacturer of Atrazine. 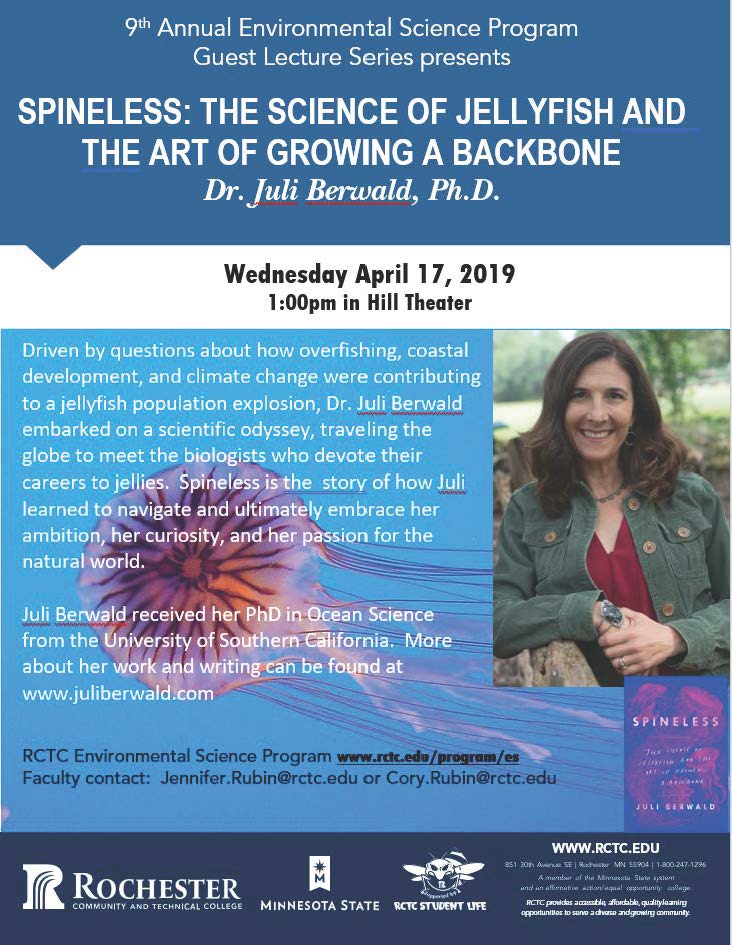 Title: Spineless: The Science of Jellyfish and the Art of Growing a Backbone

Description: Driven by questions about how overfishing, coastal development, and climate change were contributing to a jelly fish population explosion, Dr. Juli Berwald embarked on a scientific odyssey, traveling the globe to meet the biologist who devote their careers to jellies. Spineless is the story of how Juli learned to navigate and ultimately embrace her ambition, her curiosity, and her passion for the natural world.

Juli Berwald received her PhD in Ocean Science from the University of Southern California. More about her work and writing can be found at www.juliberwald.com 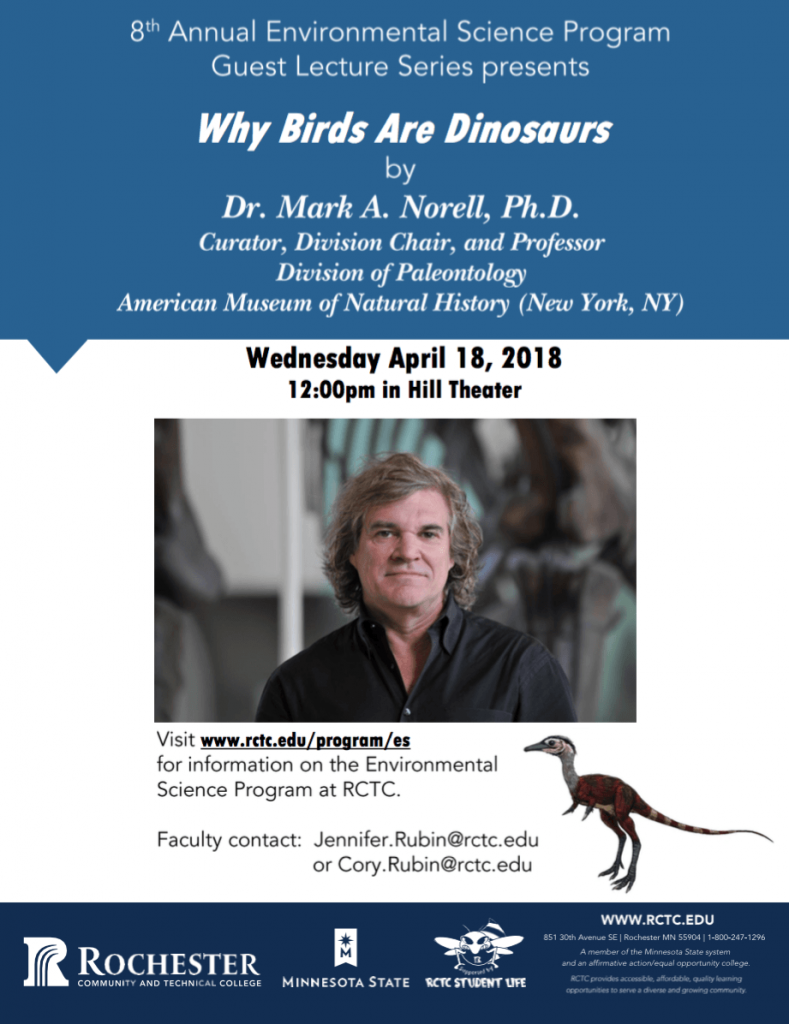 Title: Why Birds Are Dinosaurs

Description: Current scientific thought is that modern birds are living dinosaurs, specifically the current group of about 13,000 species of theropods that over millennia have developed feathers, more advanced and larger brains, and more compact and flying forms. Dr. Norell discusses his analysis and findings of fossils of new feathered dinosaurs from Liaoning, China and his approach to better understand phylogenetic relationships and pattern in the fossil record. 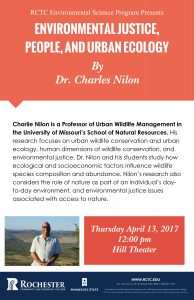 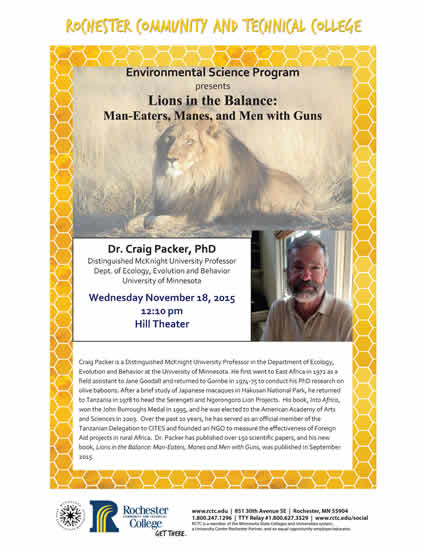 Title: Lions in the Balance: Man-Eaters, Manes, and Men with Guns

Description: Dr. Packer first went to East Africa in 1972 as a field assistant to Jane Goodall and returned to Gombe in 1974-75 to conduct his PhD research on olive baboons. After a brief study of Japanese macaques in Hakusan National Park, he returned to Tanzania in 1978 to head the Serengeti and Ngorongoro Lion Projects. His book, Into Africa, won the John Burroughs Medal in 1995, and he was elected to the American Academy of Arts and Sciences in 2003. Over the past 10 years, he has served as an official member of the Tanzanian Delegation to CITES and founded an NGO to measure the effectiveness of Foreign Aid projects in rural Africa. Dr. Packer has published over 150 scientific papers, and his new book, Lions in the Balance: Man-Eaters, Manes and Men with Guns, was published in September 2015. 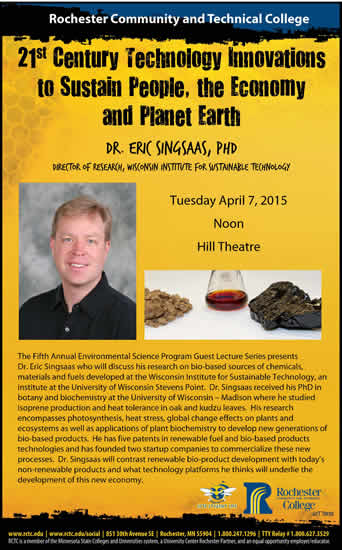 Description: Dr. Eric Singsaas will discuss his research on bio-based sources of chemicals, materials and fuels developed at the Wisconsin Institute for Sustainable Technology, an institute at the University of Wisconsin Stevens Point. Dr. Singsaas received his PhD in botany and biochemistry at the University of Wisconsin-Madison where he studied isoprene production and heat tolerance in oak and kudzu leaves. His research encompasses photosynthesis, heat stress, global change effects on plants and ecosystems as well as applications of plant biochemistry to develop new generations of bio-based products. He has five patents in renewable fuel and bio-based products technologies and has founded two startup companies to commercialize these new processes. Dr. Singsaas will contrast renewable bio-product development with today’s non-renewable products and what technology platforms he thinks will underlie the development of this new economy. 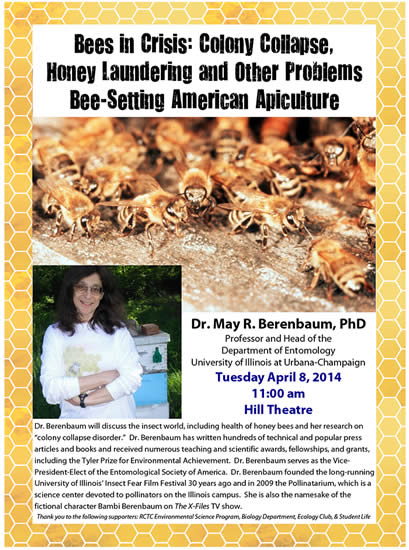 Dr. May Berenbaum, PhD, Professor and Head of the Department of entomology, University of Illinois at Urbana-Champaign

Description: Dr. Berenbaum will discuss the insect world, including health of honey bees and her research on “colony collapse disorder.” Dr. Berenbaum has written hundreds of technical and popular press articles and books and received numerous teaching and scientific awards, fellowships, and grants, including the Tyler Prize for Environmental Achievement. Dr. Berenbaum serves as the Vice-President Elect of the Entomological Society of America. Dr. Berenbaum founded the long-running University of Illinois’ Insect Fear Film Festival 30 years ago and in 2009 the Pollinatarium, which is a science center devoted to pollinators on the Illinois campus. She is also the namesake of the fictional character Bambi Berenbaum on The X-Files TV show. She was awarded the National Medal of Science on November 20, 2014. 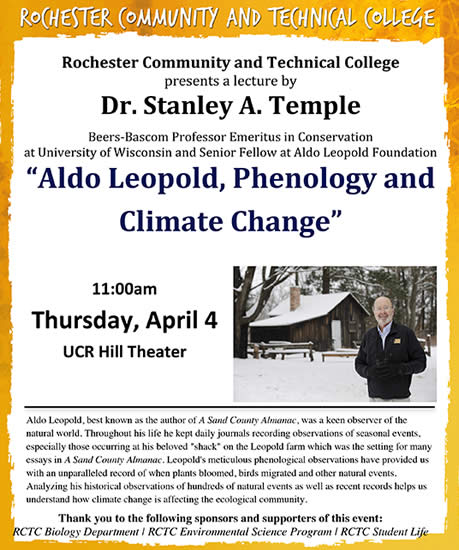 Description: Aldo Leopold, best known as the author of A Sand County Almanac, was a keen observer of the natural world. Throughout his life he kept daily journals recording observations of seasonal events, especially those occurring at his beloved “shack” on the Leopold farm which was the setting for many essays in A Sand County Almanac. Leopold’s meticulous phenological observations have provided us with an unparalleled record of when plants bloomed, birds migrated and other natural events. Analyzing his historical observations of hundreds of natural events as well as recent records helps us understand how climate change is affecting the ecological community. 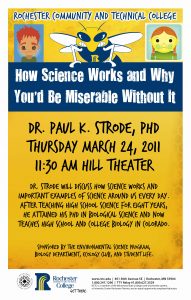 Title: How Science works and Why You’d Be Miserable Without It

Description: Dr. Paul Strode discusses how science works and gives important examples of science around us every day, with special emphasis on evolution. 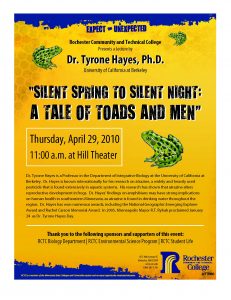 Title: Silent Spring to Silent Night: A Tale of Toads and Men

Description: Dr. Hayes is known internationally for his research on Atrazine, which is shown to alter reproductive development in frogs. Dr. Hayes’ findings on amphibians may have strong implications on human health in southeastern Minnesota, as Atrazine is found in drinking water throughout the region.